Yahaya Bello, governor of Kogi state, has told Dino Melaye, a senator representing Kogi west, that he “can’t use violence to revive his drowning political career”.

In a statement by Petra Onyegbule, his spokesperson, the governor also blamed Melaye for the death a protester in the state.

There were series of disturbing incidents in the state on Monday.

Melaye escaped after unknown gunmen attacked him as he was rounding off his speech at a rally in front of Kogi State Polytechnic.

The invaders were in possession of guns and cutlasses.

Traffic on Lokoja-Abuja highway was disrupted for almost one hour as motorists abandoned their vehicles and scuttled to safety. 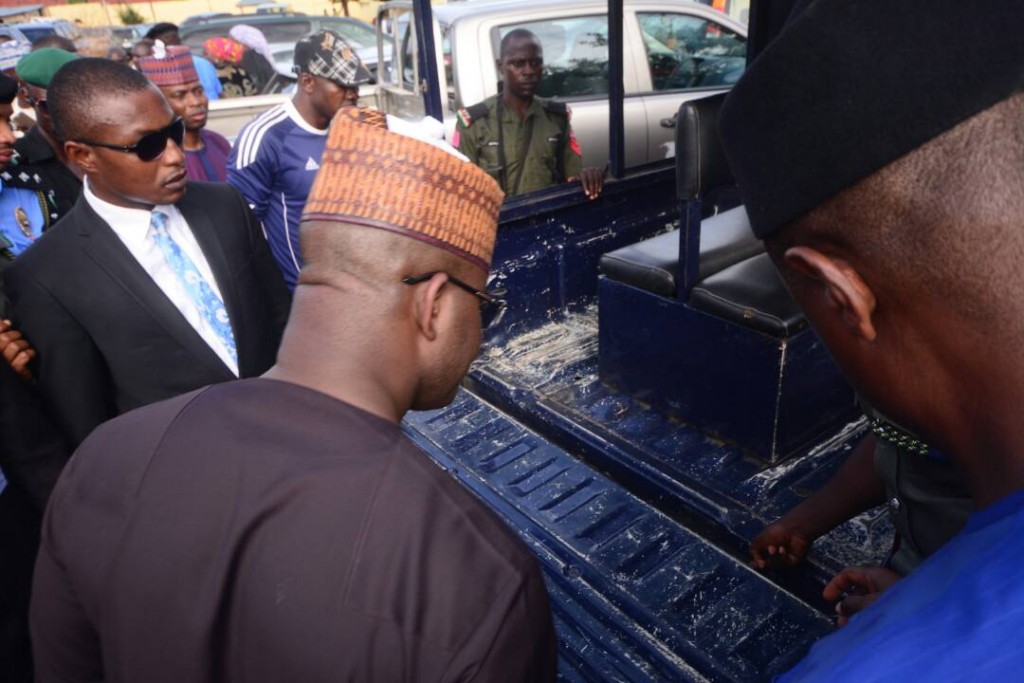 Traders at Lokoja main market also hurriedly abandoned their wares and escaped into nearby bushes and houses.

A student of the polytechnic simply identified as Saka Seidu and one other person were said to have been shot dead while two operatives of the Dapartment of State Service (DSS) attached to Melaye sustained gunshot injuries.

The senator’s Prado Jeep was riddled with bullets and was towed to the police headquarters in Lokoja.

Reacting to the disturbing incidents, Bello urged the senator to “desist from further plunging the state into needless political crisis capable of threatening the peace and security”.

“The governor sincerely regrets the unfortunate incident and calls on the people, youth and students of Kogi to remain calm, law-abiding and refrain from taking laws into their hands in the face of imminent threat to their life and security, whilst assuring them of continued safety and maintenance of security in the state,” Bello said in a statement.

“He is appalled that despite his commitment towards ensuring safety and security for the indigenes and inhabitants of the state and endeavour to rid the state of insecurity and political thuggery, the embattled senator remains hell-bent on causing mayhem in the state in a bid to save his drowning political career.

“He hereby reiterates his firm commitment to ensuring continuous security and safety of lives and properties in the state as he vows not to relent in his administration’s lofty strides in securing the life of every inhabitant in the state.

“The governor calls on young people to desist from being readily available as cheap tools to malicious politicians’ devilish use and manipulation. He reiterated that their lives are precious and should not be sacrificed on the altar of any selfish politician’s political expediency.

“He called on the authorities to expedite action on the petition to ensure there is no repeat of today’s unfortunate incident.”

At least 140 dead in weekend migrant ship sinking off Senegal